Survival of the Sun Bears is a documentary film and awareness campaign working to share the story of the world’s smallest bear and the plight of its survival.

The smallest bears in the world and their plight for survival.

When an orphaned sun bear cub is rescued from illegal captivity she must learn how to survive in the wild before she can finally be set free. A film shot on the island of Borneo, in a rainforest older than the Amazon, follows the journey of a rescued sun bear named Natalie. Conservation is brought to life as we experience Natalie making history when she steps into the wild as the first sun bear to be released by the Bornean Sun Bear Conservation Centre. 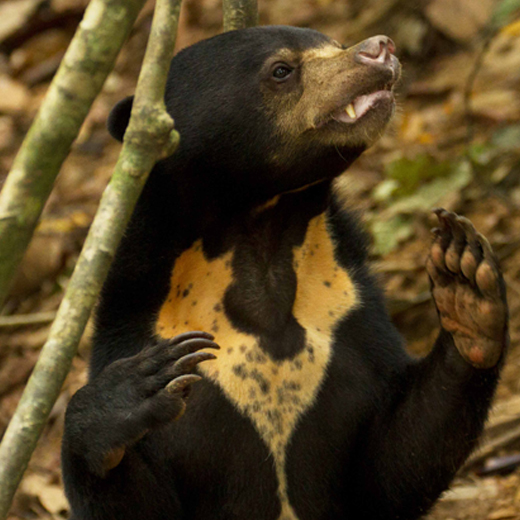 Sun bears will likely not survive without the world’s attention, thus the first step of conserving these elusive jungle bears is to share their plight with a global audience. 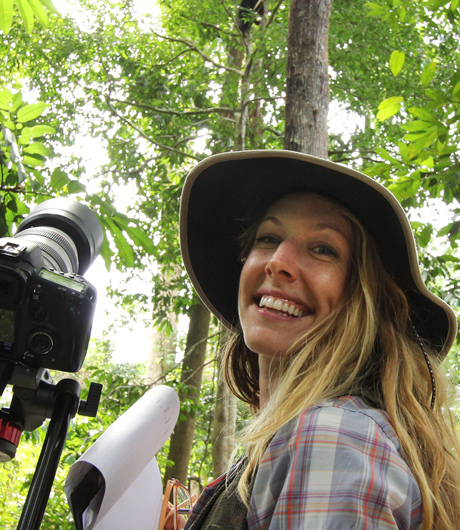 The depth of character that I found in each individual sun bear is what ultimately inspired me to direct this film, convey this critical message, and move others to fall in love with these bears as I have. I spent a year dodging King cobras and orangutans on my daily trek to film Bornean sun bears in the oldest rainforests on Earth. The resulting documentary, Survival of the Sun Bears, shares the plight of sun bears with an audience that is most likely unaware of their existence or the challenges they face, which fulfills my highest priority in purposeful storytelling.

The SURVIVAL OF THE SUN BEARS documentary illuminates how we CAN work together to conserve the last remaining sun bears and save ourselves by sustainably conserving the oldest rainforests on Earth.

"Mosquitos swarm as they slash thick tangled vines with worn-out machetes. 12 hours of relentless trekking and the jungle canopy has finally swallowed the last of daylight. It’s day seven of this ‘Search and Recover’ operation, but she is still out there. At 4:00 am tomorrow they will begin again. The day before, they caught a glimpse of her shiny black coat before she vanished into the dense undergrowth." NATALIE and how she makes history will leave you wanting more. Join our newsletter have alerts on this and more.

Contribute to the Project 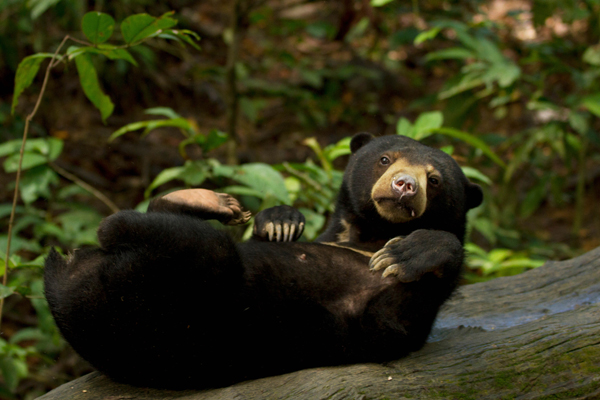 Amazing climber. Playful and Clever. After five years of rehabilitation at the BSBCC, Natalie was the FIRST captive sun bear to be reintroduced to her native habitat. She was monitored post-release with the help of a satellite collar and now lives a new life as a truly wild sun bear. 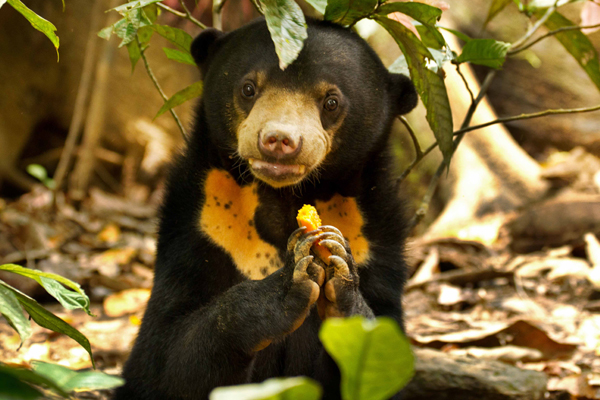 Loves Coconuts. Active and acrobatic tree climber. Excellent forager. Debbie spent six years at BSBCC regaining her skills to survive as a wild sun bear before she was successfully released back to the rainforests of Borneo. 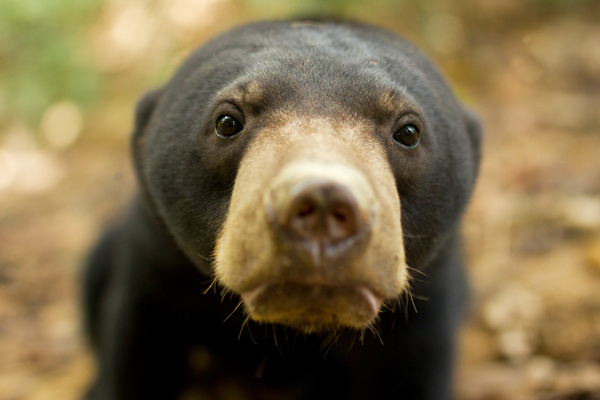 Very charismatic! She spends a lot of time sun bathing and climbing to the top of the tree canopy, often 40 meters high. Ah Bui means “friend” in the local Murut language. She spends every day foraging and climbing in the forest enclosure with her peers. She may be ready for release soon.

Support to the Project with photos:

Own some of the project with a frameable photo of our stars. When you purchase a sun bear photograph you are directly supporting our campaign to promote sun bear conservation!

This project would not be possible without the dedication and expertise of:
Bornean Sun Bear Conservation Centre, Nu Vista Media Production.

Survival of the Sun Bears is a conservation campaign focused on building a global awareness of sun bears, and what they need to survive. We are working to create story-telling media that shares the story of sun bears in Borneo. Media developed is made available to non-commercial parties for education, advocacy, and fundraising. 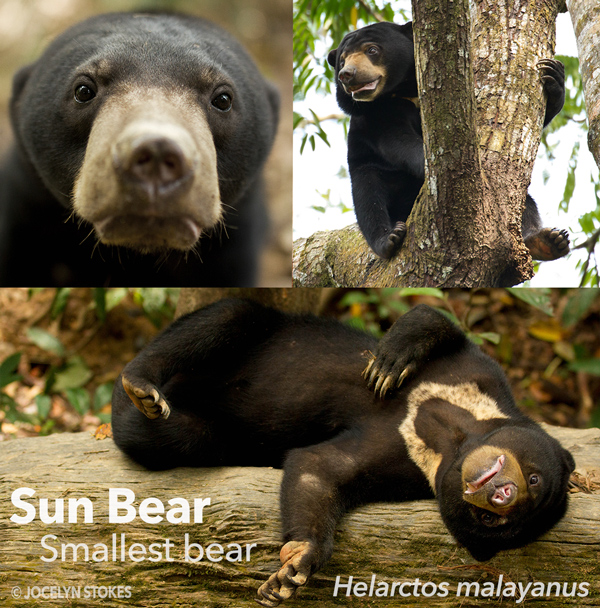 Located in Southeast Asia, Borneo is the third largest island in the world. The island is shared among three countries: Brunei, Malaysia and Indonesia.

It is one of the most biologically diverse places on Earth. Indigenous tribal groups have lived amongst the forests of Borneo for thousands of years. Merely a hundred years ago native headhunters ruled remote parts of the island. Indigenous tribal groups still strive to remain intact today. The combination of geographical history and varied terrain of Borneo makes the island a biologically diverse ‘hot-spot’ of evolution.

For over a decade, scientists in Borneo have been discovering at least three new species per month. 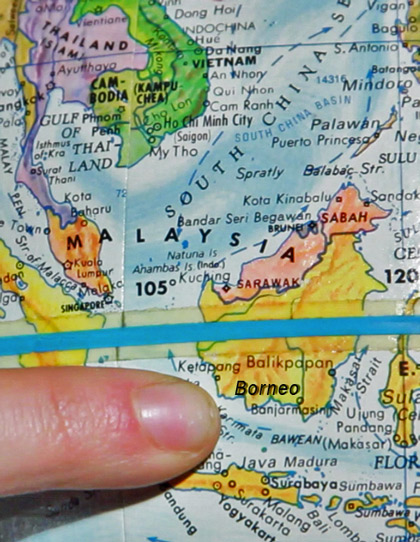 Borneo is home to more than 15,000 species of flowering plants, at least 222 different species of mammals, 420 resident birds, 100 different amphibians, more than 700 species of trees, and more than 500 species of wild fruit. All these species have evolved to live in their unique forest environment.

The sun bear is the smallest of all eight bear species. Can you name all eight? Sun bears are also the least known and least studied species of bear. Male sun bears range from 60-150 lbs. (20-40 kg), while female sun bears range from 40-80 lbs. (30-70 kg). Sun bears live in the tropical forests of Borneo. They are the most arboreal of all bears, which means they spend most of their time in trees. They each have a unique "sunshine-patch" on their chest. Helarctos malayanus (Sun Bear) Their extremely long tongues and claws are specialized for life in the trees. They can use their powerful claws to crack coconuts wide open, they have a keen sense of smell for hunting termites and they love honey. Historically, sun bear populations were found in most of mainland Southeast Asia. Now, most of these populations are extinct. The remaining wild sun bear populations inhabit the rain forests of Borneo. Little is known about wild sun bears because they are so elusive in their jungle homes, so there is much to learn! Further research about wild sun bears is essential. We DO know that sun bears do not need to hibernate, like other bears. Sun bear cubs tend to stay with their mother for at least 18 months. Sun bears eat an omnivorous diet of mostly insects and fruit. Mmm… termites! 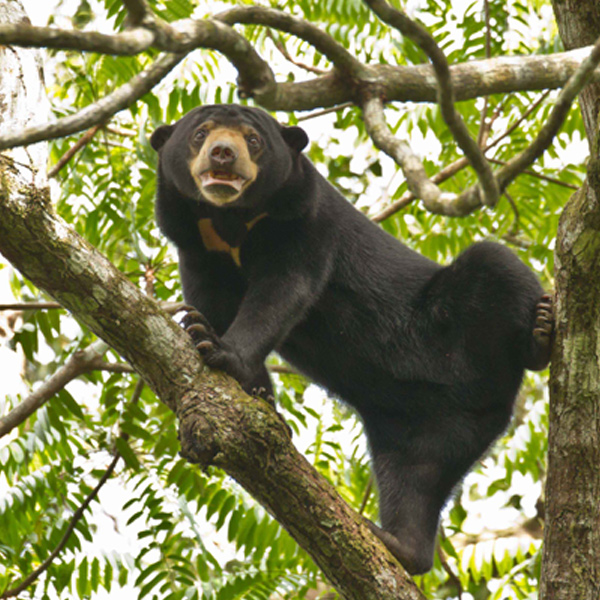 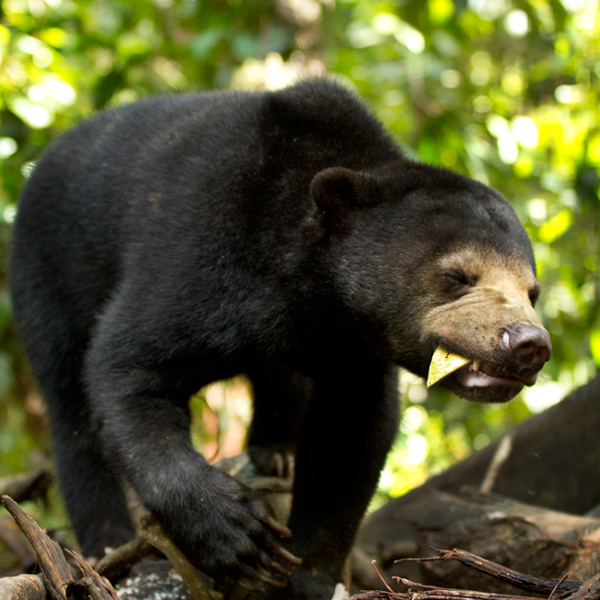 These little known bears are faced with extinction due to the triple threat of extreme habitat loss, poaching and the illegal pet trade.

In total sun bear populations have declined by at least 30% in the last 30 years (IUCN 2007). Although, sun bears have been listed as “vulnerable” on the IUCN Red List of Threatened Species since 2007, the current status of sun bear populations is unknown because there is not enough information about wild sun bear populations. This is why sun bear research is essential! Scientists are afraid that sun bears are actually an endangered species, but the lack of data available does not allow for proper protection. Sun bears face three primary threats: These little known bears are faced with extinction due to the triple threat of extreme habitat loss, poaching and the illegal pet trade. 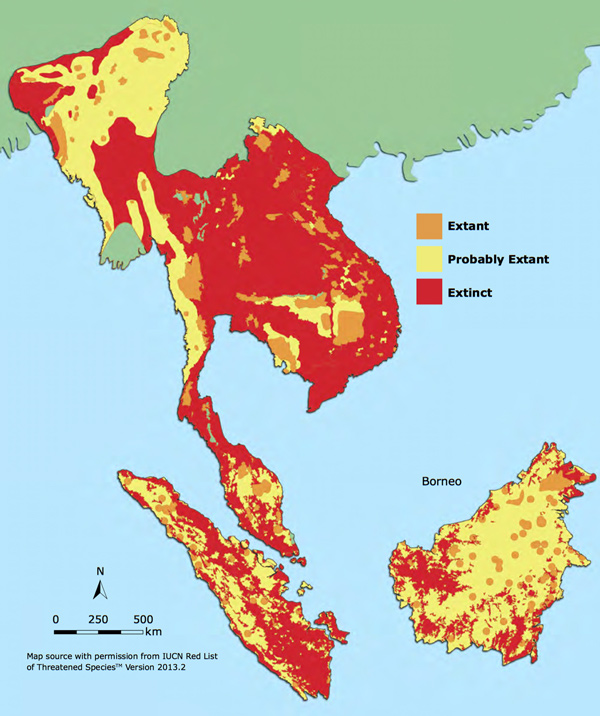 Habitat loss alone has reduced sun bear population size by at least 75%. The rapid loss of forests in SE Asia due to unsustainable logging practices and agricultural development is leaving sun bears homeless. In Malaysia, Borneo, deforestation for the development of palm oil plantations continues to be one of the biggest causes for habitat loss. Palm oil is in 50% of all packaged goods today.

Baby sun bears are extremely small and cute, which makes them a target for the exotic pet trade. Often, mother bears are killed and the baby bears are kept as pets. Keeping a sun bear as a pet is cruel, for they live a horrible life behind bars, kept in chains and cages. If these bears are lucky enough to be rescued, they have been deeply traumatized, deprived of a natural life, and require years of rehabilitation to regain sanity.

Commercial poaching is widespread in Asia, which supplies the wildlife trade market (and black market) where consumers purchase bear paws, gall bladders (or bile) and other bear parts for Traditional Chinese Medicine and expensive delicacies. Bear bile farms can be found in China, Vietnam and Korea, where bears are commercially-farmed in small cages and bile is extracted from their gall bladders to make traditional medicines.

Save Jungles = Save Bears

Sun bears create habitat for many other creatures by using their long claws to dig holes in trees and fallen logs. Sun bears are important seed dispersers for many fruit trees because they eat such a variety of fruits and travel great distances in the forest. In this way, sun bears keep the forest healthy, diverse and alive!

"They give us information about the environment"
If sun bear populations are healthy in an area it indicates they are living in a healthy, balanced ecosystem. 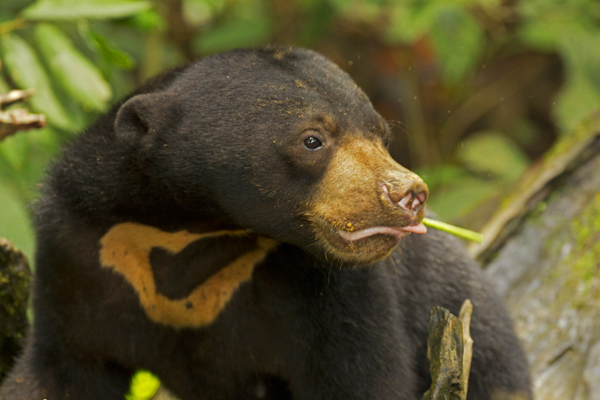 "Many other animals live with them"
Sun bears live along side thousands of other species that also share the need for a healthy forest habitat.

Save Bears = Save Jungles

Get Involved, YOU can make a difference in saving sun bears from within your community.

NOW is our chance

NOW is our chance to conserve and delight in these special bears. With our forces combined, sun bears can thrive again! There are four things that you can do to help.

YOU can make a difference! Share sun bears with your community. We truly can help sun bears if more people know about them. 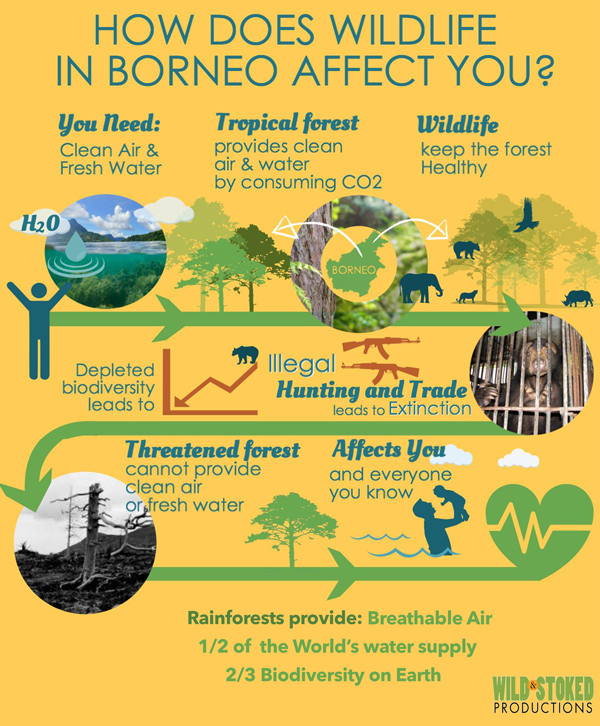 2. Be a Smart Consumer 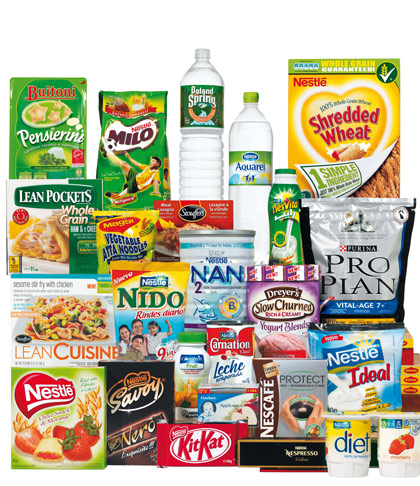 Palm oil is in 50% of packaged goods & cosmetics. Look at the labels before you buy!Many times palm oil can be listed under different names, such as: vegetable oil, Stearic Acid, Sodium Laureth Sulfate, Palmate, Cetyl Alcohol and Palm Kernel. Do! Purchase products that support sustainable agricultural practices.

Get to know your Wilderness!

We all exist within one ecosystem – Earth. Each creature, species and habitat is connected and integral to the other. Most endangered species are being lost because we are not aware of them. The more we learn, the more we can teach, and the closer we become to regaining balance in this precious global environment that we all rely on for all life.

You can support the protection of wild places by voting with your dollar and your voice. Plant a tree. Ride a bike. Buy a hybrid. Limit your Paper-products. Buy Organic.

Pick at least One earth-friendly Goal and Stick to it!

Donate online
we need your support

This project would not be possible without the dedication and expertise of:
Bornean Sun Bear Conservation Centre, Nu Vista Media Production.

"I hope with setting up the BSBCC, we can do more to help sun bears and their forest that is so precious to all of us. The challenge is huge, and I am ready to take the challenge. However, I simply cannot do this alone. Together we can make a difference for sun bears and the other magnificent species of this region." 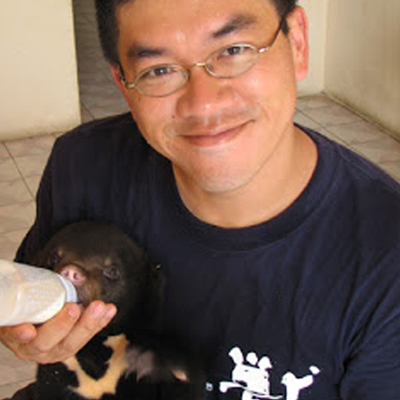 "The only way to save a rhinoceros is to save the environment in which it lives, because there's a mutual dependency between it and millions of other species of both animals and plants." 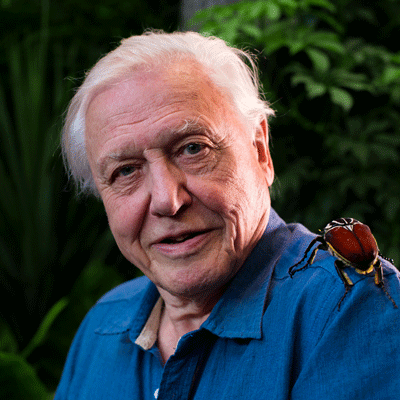 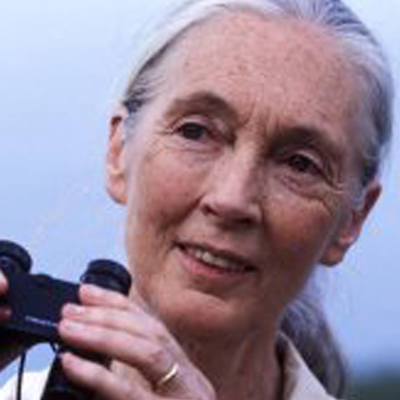 You can make a big difference in giving the wildlife in the tropical forests your help.

Survival of the Sun Bears is a conservation campaign focused on building a global awareness of sun bears, and what they need to survive. A project of Wild & Stoked Productions, we are creating story-telling media that shares the story of sun bears in Borneo.